A trading savvy friend asked a pertinent question recently. She had some funds available and was considering three alternatives. She had tested them using good modeling and simulation technique and all three seemed safe. Safe in the sense that all three traded liquid issues and out-of-sample results were similar to in-sample backtests. The profit potential for the three were 20% per year, 10% per year, and 2% per year.

She recognized that the one that offerred 2% was probably her “risk free” alternative. It would be the place to park funds when no other system needed them for an active position. It was not a future, and there were no options, so there was no leverage available to raise the annual return.

As we talked about the 10% and the 20% systems, she said that she would be fine trading any system that had a risk within her tolerance. She described her tolerance as wanting to keep drawdowns limited — no more than 10% from highest equity. We agreed that there is always some chance of a “flash crash.”

After some discussion, she stated what we would use as her “personal risk tolerance.” She would be trading a $100,000 account, forecasting 2 years into the future, wanting to hold the probability of drawdowns greater than 10% to a chance of no more than 5%.

She is describing her desire to manage the trading of the system to avoid getting caught in the “tail risk” of the distribution of the trades.

The safe-f and CAR25 metrics I have developed are designed to do precisely that. To illustrate the techniques, we will use the same trades used in the Trade Quality posting earlier.  (This is not one of the three systems my friend was considering.)   The equity curve that was produced during validation is shown in the next chart. 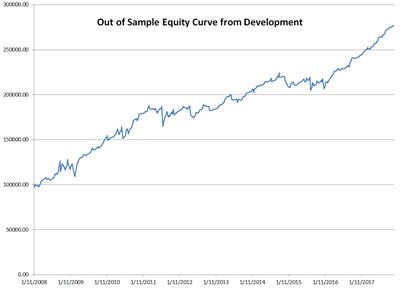 There are 355 trades over the period from 1/1/2008 through 12/7/2017 — 9.93 years — 35.75 trades per year. Her forecast horizon would have an average of 71 trades. The best we can hope for is that the distribution of trades in the future will be similar to the distribution of the “best estimate” set of trades.  At this point, the best estimate set of trades is the set of trades that were made during the validation phase of development — the trades in the out-of-sample period. 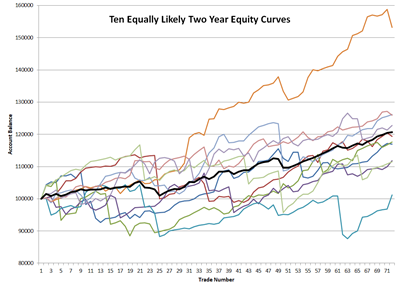 To estimate the drawdown that might be expected from trading 2 years, we use the Monte Carlo technique.  We create many, say 1000, equity curves, each consisting of 71 trades, and compute the final equity and maximum drawdown associated with each equity curve.  We use those 1000 individual equity curves to construct the distribution of drawdowns, allowing us to estimate the probability of drawdowns of various depths.  As the next chart illustrates, when the system is traded at full fraction, f = 1.00, the inverse cumulative distribution of maximum drawdown shows that risk is higher than the trader’s risk tolerance. 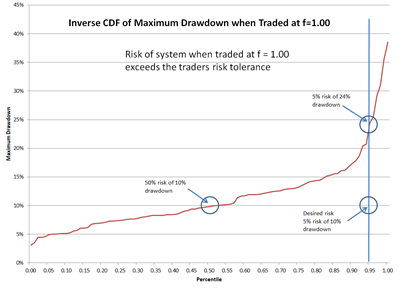 She wants to hold the risk of drawdown greater than 10% to a chance of 5%.  That is represented by the lower-right blue circle.  It is at the intersection of the 10% drawdown horizontal line with the 5% chance vertical line.  The curve of the inverse CDF of maximum drawdown is above that.  It shows that the risk of a 10% drawdown is about 50%; and the tail risk — the maximum drawdown at the 95th percentile — is greater than 24%.

This is the risk inherent in trading this system.  All funds allocated to this system have this risk profile.  To hold the risk to her tolerance, the $100,000 must be split into two accounts.  One is used to trade the system, and the other is kept in a risk free account to act as ballast to temper the drawdown of the portion being traded.  Through trial and error, we can determine the fraction that will be used to trade in order to move the CDF curve down so that it passes through the circle at her risk tolerance.  That value is 48%. 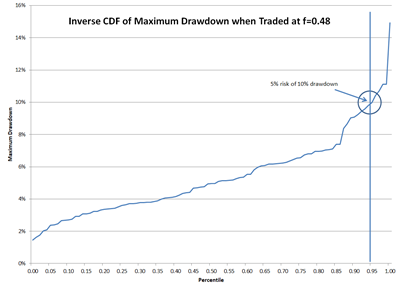 The curve of the inverse CDF passes through the intersection of a 5% risk of a 10% drawdown.

In order to hold drawdown to her tolerance, she uses 48% of account equity for each position, holding the remaining 52% in a risk free account.

We rerun the simulation with f set to 48%, this time computing many equally likely equity curves and recording final equity.  The next chart shows the inverse CDF of final equity for an account that was initially funded at $100,000 and traded at f=0.48 for two years.

The horizontal axis gives the percentiles.  At the 25th percentile, the final equity is $103,800.  The compound annual rate of return corresponding to a 3.8% gain in two years is 1.8%.

CAR25 is a conservative metric that can be used to compare alternative uses of funds.  It is the compound annual rate of return for the risk normalized profit at the 25th percentile of the distribution.  The CAR25 metric for this system is 1.8%.

The trader can compute CAR25 for all alternative uses of the funds, including other trading systems.  When the risk is normalized, the system that has the highest CAR25 is the one that should be traded.

Even though the out-of-sample equity curve looked good, the risk-normalized profit potential is low.  The system, using the model developed and validated, cannot be made less risky.  The trader can increase the profit potential only by relaxing his or her personal risk tolerance.  When the analysis is rerun using a risk tolerance of a 5% chance of a 20% drawdown, safe-f is 0.90, final equity is $110,800, and CAR25 is 4.9%.

safe-f and CAR25 continue to be useful after development and while the system is being traded.

As trades are made, either actual trades made with real money or shadow trades that would have been made, they are added to the best estimate set of trades.  safe-f and CAR25 are recalculated and provide the trader information about the health of the system.  When trades are accurate and profitable, safe-f increases and a larger portion of the funds can be safely used to take live positions.  CAR25 will increase.  Losing trades cause safe-f to drop, requiring that a smaller portion of funds be used for trading and a larger portion be kept in reserve.  CAR25 will drop.

safe-f and CAR25 will drop for any of the following reasons:

In general, the cause is probably a mix of all three.  Whatever the cause, the trader should take a drop in safe-f as a warning that the system is becoming riskier and larger drawdowns are ahead. (Drawdowns are only opportunities to increase position size when the system is inherently profitable and is stationary — neither of which can be relied on in trading. )

Next — Impulse versus State Signals